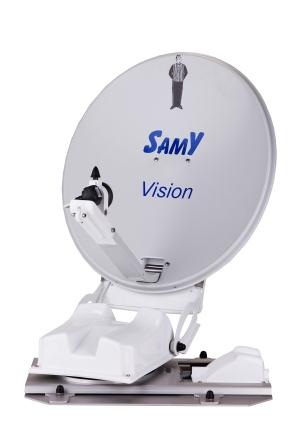 The most advanced Satellite system, designed specifically for the NZ market.

If you wish to stay up-to-date with all the news from around the world or you do not want to miss your favourite TV show even when travelling, you will want a flexible antenna that is tuned to your personal needs. The SamY Vision system, featuring an intelligent control unit, is completely independent of a receiver allowing the system to be precisely matched to individual requirements.

The compact and dynamically styled control unit is mounted inside your vehicle. It forms the intelligent link between satellite system and receiver and features an illuminated display. The touch of a button is enough - the clever system then automatically finds the satellite of your choice.

SAMY: THE STORY SO FAR

The SamY is manufactured by ten Haaft in Germany, Europe’s No. 1 Automatic Satellite Dish Manufacturer.  SamY is an usual name to give to a satellite receiver system, however its name derived from the butler that looked after the two young brothers that went on to start the original manufacturing company in Stuttgart.  Such was their affection for him they named this automatic dish after him.  Whilst the company is no longer family owned the model’s affectionate name has continued.

Daryl and Sue Muir from RSE (NZ) Ltd spent considerable time looking for a system that would match NZ’s unique satellite footprint and provide long term operation to their customers.  They placed a proposal to the ten Haaft management and after due consideration, ten Haaft sent their Technical Director out to re-evaluate all of their satellite dishes here in NZ.  They then spent 3 weeks throughout NZ with these dishes evaluating and writing new operating software to suit the NZ environment.

After all the information was obtained and analysed it was apparent that the SamY model was by far the best suited for our market.  Its 54cm dish size gave maximum signal gain in all areas around the country and any larger dish size produced no increased signal gain for the increased cost of the dish.  It was noted that if you decreased the dish size the signal gain decreased dramatically and that for optimum dish reception in all areas of NZ that a 45cm dish was the minimum requirement to ensure reliable reception.  Anything smaller is severely influenced by NZ’s climatic conditions and rainfall, and this is especially important as more of our motorhomers and caravaners are travelling throughout the year.

Final testing was undertaken once the software was completed to ensure fast reliable signal acquisition and areas such as LNB skew were calculated.  We were impressed by the professionalism that ensured that nothing was left to chance and every setting or adjustment on the final product was checked and double checked with typical German efficiency.

Another side effect of this whole process was the aspect of LNB skew.  NZ, due to its north and south length and relatively short east to west distance, has a very strong satellite signal nationwide.  With usual German competence, ten Haaft produced a calculation that factored in latitude, longitude, distance from the satellite, earths curvature and satellite downlink power.  All of these factors, plus a few more technical details, produced a final calculation of plus or minus 10° skew variation nationwide.  Quite surprising.

However, if you decrease the dish size, the skew position becomes more critical.  If you reduce your signal capture, the LNB position is more important.  Of course, if you reduced the dish size below 45cm then not only is your LNB skew setting more important, the dish is then influenced by poor weather resulting in rain fade.  The SamYs 54cm dish proved to maximum gain with no skew variation required anywhere in NZ, along with minimal signal disruption due to the weather.

As the SamY is purchased from ten Haaft in Euros, we looked at options to keep the final cost as reasonable as possible and comparable with Distributors in other countries.  They are imported in knocked down form to save freight and assembled in our workshop using a high quality TRIAX dish and LNB from Denmark.  Each unit is then tested and adjusted for optimum signal reception using the latest in digital satellite test meters.  The SamY is then packaged along with our own Operational and Installation Instructions.

As an indication of ten Haaft’s commitment we had another visit from the Technical Director in November 2012 to recheck satellite transmissions and software and to  ensure all operating systems were within specification.  Another great feature of the SamY system is that if there are any future changes to satellite transmission data or TV providers, the information can be simply loaded onto an SD Card (camera card).  It is then easily inserted into the side of the Controller and automatically updates the SamY in 30 seconds.  This can be carried out in the field by the owner operator.  Very simple indeed.

Sales to date have exceeded our expectations.  The fit and forget installation, reliability and elegance of the SamY and the added 0800 support provided by RSE to all SamY owners has placed it as NZ’s leading Auto Locating Satellite Dish in the NZ market.

RSE is the Exclusive Importer/Distributor for ten Haaft satellite systems in NZ.

View your shopping basket or browse other items.